Last night, I had a “Princess and the Pea” moment. Typically, when I go to bed, I’ll pull the top pillow down to the foot(-ish) of the bed, and get in, lying on my back. Typically, I have to shoo Smokey and/or Cocoa off the covers and top sheet so that I CAN get in bed. The reason I lie on my back (at first recline) is for feline belly rubs.

Smokey comes up my right side, crossing or perching on my chest and ribcage 3 or four times before finally settling into my right armpit. I’ll start his belly rubs, while he rests his head on my diaphragm, watching Cocoa attempt to settle in on my left side. She wants to walk all the way up to my face, and if I reach for her At All (to scratch her head or whatever), she’ll back away toward my feet. She does this three or four times as well, sniffing or licking Smokey’s head in the process, and then she’ll eventually plop down (very ungracefully) against my left ribcage, throwing her back leg over my hand for optimal belly rubs.

Cocoa would honestly rather have me to herself, so she typically hounds me for her personal belly rubs throughout the day, or she’ll wake me (too) early for one-on-one snuggles. This means that she also tends to depart the bedtime belly rubs pretty quickly; within five minutes, Smokey has me to himself.

After ten or twenty minutes (just about when I’ve fallen asleep), Smokey will depart, as well. I don’t blame him; what’s the point of perfect belly rub positioning if you’re not actually getting your belly rubbed? Once I am sans feline, I’ll roll over to one side and curl up, semi-fetal position, and go to sleep for the night (until Cocoa decides to wake me {too} early).

Last Night, when I curled up, I felt a pain in my ankle. It wasn’t a sharp pain, but it did feel like, if I didn’t do something about it, I would end up with a stone bruise. On My ANKLE. So I lifted the pillow I use as weight on my feet, and discovered a mouse. 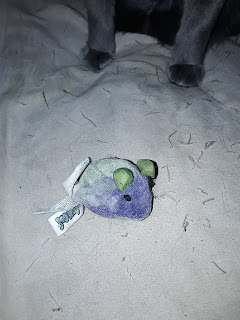 No, it wasn’t a live mouse. Nor was it a dead mouse. It was a stuffed catnip mouse. When the mouse was new, it was vibrantly colored and had a purple felt tail. It still has the bell or rattle or whatever it is inside it that makes it an appealing toy (the catnip doesn’t hurt its appeal). It no longer has its tail. The ears are frayed. One eye is frayed. Most of its surface is frayed. It seems to be leaking stuffing through its muted-in-color, no-longer-vibrant pelt. Stephen often calls it a FISH (because the ears look like fins, and it has no tail).
But it’s well-loved, and the bed is honestly the best place for us to store the most-well-loved toys belonging to the cats, so they don’t go “hunting” in the middle of the night, while we’re sleeping. They can “hunt” all they want during the day, as long as we remember to bring the toys to bed with us.

*note to self: don't forget to return FishMouse to the bed, when this is posted

At Any Rate… the bell or rattle or whatever’s inside that damn mouse felt like a stone. It wasn’t a pea at the bottom of the stack of mattresses, it was atop the covers but under a pillow. And it was bugging me, y’all.

Email ThisBlogThis!Share to TwitterShare to FacebookShare to Pinterest
Labels: cats, dreams, hashtag this, it's a puzzle