So, apparently, I got too busy to remember my Sadiversary

... which is actually a Good Thing, if you think about it. Mommy died in a horrible car wreck eleven years ago yesterday. In many months, the 28th is a bit of a trigger. Usually, the week or two approaching October 28th, I start remembering that my Sadiversary is approaching, and I get a bit melancholy.

I mean, I grieve all the time, still. Not that I'm in a constant state of mourning, no. But most memories I have of Mommy bring both smiles and tears. I even talked about my Roots piece the other day, with a friend who may have remembered it, because we were talking about a mutual friend and all the shit she's been going through in the last few years, what with chemo and stuff. I remembered the voicemail that mutual friend had left me right after Mommy died, and in that recent conversation, I cried a little. But I didn't remember that the Sadiversary was this weekend. Wow.

InnerHippie posted a note in her Facebook page for the family to read, about how she commemorated the Sadiversary yesterday/today (I think she did the thing yesterday but posted it today). Quite a healing for her, a Good Thing. I'm very glad for her. Also, it raised a discussion amongst the family about our own steps we might take. So if any of the family do follow up, I think the healing will also take place for them.

Email ThisBlogThis!Share to TwitterShare to FacebookShare to Pinterest
Labels: #ThreeGoodThings, blogging, hashtag this, holidaze, it's a puzzle, Mommy

I'm... getting older, now, so I guess I'm starting to think about "Bucket Lists". Not that I've ever had a Bucket List or anything, and I've done plenty of pretty cool things in my life to not really have a need of a Bucket List. But one thing I'd never done in my Entire Life was attend a fan convention. Sure, I've attended weekend seminars for shit, and work-related conventions, like that Admin Con back in '01, right after 9/11 happened and my life was falling apart anyway, and I was praying on the flight from Charlotte to San Francisco for a terrorist takeover (no, really, I really was praying to die in a plane crash so I wouldn't have to face my failing marriage)... or ShowBiz Expos from time to time, here in LaLa Land, which have moved my showbiz career forward, um, an inch?

But a FAN Convention. Never. I'm a fan of Star Trek (TNG, mostly), and the BSG reboot, and the JJ Abrams Trek reboot, and the Doctor Who reboot (and Torchwood), and the DC and Marvel universe superhero movies, and Firefly, and Buffy, and general fantasy and comics genres. I'd just never bothered to attend a Con. Probably primarily because they can be costly, and possibly also because I was intimidated by the idea of cosplay. Sure, I like to wear costumes. I don't (necessarily) want to build said costumes, or walk around a convention hall in something that isn't comfy enough to wear all day at home (i.e. heels, a corset, or wigs/heavy makeup).

So, knowing this about me, when Stephen got wind that LA was hosting #StanLeeComiCon17 at the convention center today, he ran "the idea" by me, and I agreed that we should spend the money, and book ourselves off work. That is precisely what we did.

Today, I attended my first Con. It was lovely. It was pleasant. It was fun. I was not intimidated by the crowds (the LA Convention Center is NOT the San Diego venue by a long shot). I did not feel "less than" for not cosplaying (I wore my dangling skeleton earrings because Halloween is almost upon us; that is "all"). I did not feel obligated to purchase anything. We took the subway to the train to a block or two away, and walked in with our e-tickets in Stephen's phone. I took photos. Here ya go: 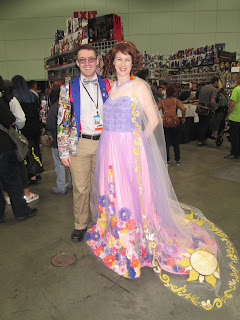 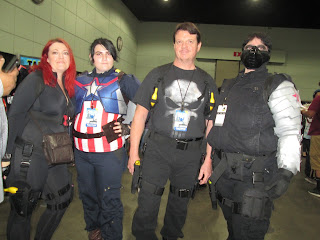 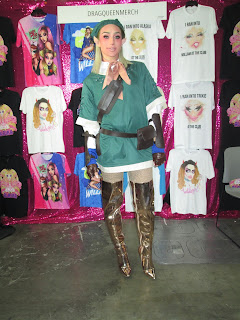 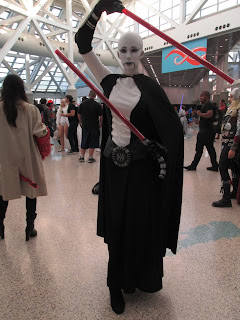 I'm off to bed now, so I can return to the pet supply store for an early meeting in the a.m. Maybe I'll update this tomorrow night (or maybe I won't). I had fun stormin' the castle - ask me anything ya wanna about all these pics!
Posted by emelle at 10:36:00 PM 2 comments: