I don't really have anything new to say (I don't think - we'll see if this manages to be a real post or not), but I happened to check in to my blog stats page, and noticed that This Page had been recently viewed by at least three people. So I went there to see what I'd said, way back when.

I remember the incident but not the action. Facebook has never been my choice of social media hangout, ya know? Yes, I did used to use it a lot to look for work (not that I ever really found work there), and yes, I used to link new blog posts there for the folks who weren't subscribing. Nowadays, anything I tweet over in the Twitterverse gets linked to my Facebook page for anyone not following me in the aviary. But I really don't hang out on Facebook.

So that incident with the Troll has had very little effect on my actual life. #Blessed

In other news, I'm sixteen days away from our first performance of our YOU Project at the Hollywood Fringe Festival. We've been rehearsing up a storm, and this upcoming Sunday will be an intense rehearsal followed by a group birthday party, since two of our members will celebrate ON the 2nd, then my birthday is Monday, another member's is Tuesday, and then one more person's is the following Sunday... That's a lot of birthdays in a clump, out of twelve people! Then we have our "tech" rehearsal that following Sunday, and really start to let the panic* creep in! We open on the 14th!

*Just kidding about the panic. We got this. We're totally ready. We're actors! This is what we DO! 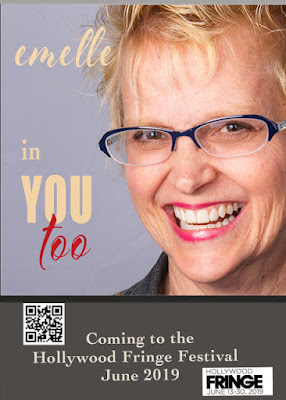 I had the month of May "off" from the Conservatory, but June is back on the schedule. So, attending some classes, volunteering at some classes, TEACHING/Leading a session (mostly just tech support at this point, but it's still not nothing)... volunteering at the Foundation... rehearsing... submitting for PAID work and hopefully getting to audition and book some stuff... and continuing to record audiobooks for the niblings, and maybe get a commercial and/or VO agent along the way?

So, yeah, I guess this post was longer than I anticipated. 'Sall Good.

If you're local-ish to Los Angeles, wouldn't you LOVE to come see some good live theatre? The Hollywood Fringe Festival is the largest LA theatre festival of the year, which means there'll be plenty of (hopefully) amazing stuff to see on a stage nearish to you! You can get tickets to MY shows by scanning the QR code or clicking here (I'm in You too, not You again). Thank you in advance for supporting live theatre (and me!)
Posted by emelle at 3:04:00 PM 2 comments:

The Depression of an Aging Family Member

A lot of my IRL and Twitter friends know that I call Daddy every day. He lives in Central Florida, in a townhouse he and Mommy bought just a few weeks before she died, in 2006. It's on a golf course, in a gated community, in the middle of no-fucking-where. In the past few (five-ish?) years, they built a Publix just outside his closest gate, and since he's got a golf cart, he'll do his twice- or thrice-weekly grocery shopping pretty conveniently. There's also a CVS Pharmacy in that lot, and everyone who works at Publix or CVS there knows him. He has friends. There's also a liquor store in that complex, so of course, he's popular there as well.

So he's getting older, as we all do, if we're lucky. He no longer golfs or even hits balls at the driving range. He doesn't walk any distance greater than the end of his driveway, most days. He doesn't eat well unless I remind him to. He drinks. He's an alcoholic, and at 3/4 century years old, that's not changing. He's had plenty of strokes and mini-strokes, so he has one of those "call an ambulance if I fall" necklaces. I have to remind him to wear that, too.

Most days, in addition to getting good answers to those questions, we'll also have an interesting conversation about other human contact he's had, or upcoming visits he's looking forward to. Yesterday and the day before, he was so drunk by the time I called that I barely got answers to my questions. And then before his bedtime at 8, he'd called and left me messages, wondering why I hadn't called, and whether I was dead in a ditch or something.

*Lemme tell ya. Getting a voicemail asking if you're dead because you neglected to call is disconcerting once. TWICE, it's upsetting.*

Yesterday's voicemail came through while I was out getting my steps... buying a bottle of dark rum to replenish my homemade vanilla extract... so I called him back when I got home. I yelled at him for almost five minutes, reminding him to check his call history when he wonders if I've called; reminding him that I'm eating well and exercising and therefore strong and healthy and less likely to be unexpectedly dead than he; reminding him that when he's drunk when I call, we're unable to have good conversations.

I love my Daddy. I know he's an alcoholic, and nothing I say will change that, so I don't try to change that. Yesterday, after topping off my vanilla extract jar, I stuck the remaining rum in the freezer, because by the end of my day, I needed a drink!

Daddy is moving to Colorado in a month. He's had the last visit with his baby brother that he'll ever have; his best friends have moved to Panama; his youngest son (my baby brother) will be filling his house with small children for a few days before he moves; my sister will arrive in all that bedlam to help him pack up, and that'll be it. I'm blessed to be so busy in my career right now, but I don't have time to squeeze in one last visit. And now I'm crying.

#AgingSucks, y'all. I know, I know, it's better than the alternative.