We went to the movies, y'all! At the Movie Theater! It was on a day we were both not working, this month, but honestly, my brain is pretty fried from all the busy I've been, so I don't recall exactly when it was. But I do know what it was, so let's proceed.

We're fans of the comic book and superhero genres, so of course we've seen every Marvel and DC film and show as they are released. Shang Chi is part of the Marvel universe, but like so many of the characters in that universe, I was completely unfamiliar with his story or how he tied in, prior to our viewing.

This flick has a ton of action/fighting scenes, and when they take place in urban Macau, China, on temporary bamboo scaffolding 50 stories up the side of a huge corporate building, they are very reminiscent of Jackie Chan's fight choreography. This is not a bad thing. When they take place in mystical villages and people get to leap over each other, they are very reminiscent of "Crouching Tiger, Hidden Dragon". Also not a bad thing.

And when Michelle Yeoh fights, it gives me hope that there's still time for me to get to experience some wire-work (not that she did any wire-work in this film, shut up).

Beyond the fighting, there's the story. There are the characters. There's AWKWAFINA, who is amazeballs. And there's the Marvel tie-in, courtesy of Wong from the Doctor Strange part of the "world" (and, well, the whole "Ten Rings" thing that I'd forgotten they'd mentioned).

Having no foreknowledge did not impede my enjoyment of this film. I'm curious as to whether actual comic book fans enjoyed the film as much as the ignorant masses (<== I include myself in the latter group).

Overall, the story flows at a decent pace, and in the right order to allow the audience to keep up. The writing, direction, and acting is all top-notch (as one expects from Marvel these days). We laughed our asses off, quite frequently. If you like all the same stuff I've just mentioned, then make sure you go see it!

I was keeping myself out of the world of background acting for most of the pandemic for a variety of reasons... COVID, a "lack" of work, wanting to focus on auditions for foreground acting, and the whole audiobook side of my career. Also, Stephen and I were house-hunting for a bit, thinking we'd be upgrading our lifestyle from that of renting. Right around the beginning of August, though, because pretty much every audition I had was a self-tape that I could "fit" into my schedule, I gave my calling service the "go ahead" to find work for me.

And "find work" is what happened! For the past six weeks, I have been averaging four days per week where I have someplace to go (and get paid for going)... COVID tests, fittings, actual days on set, working. Most of the work days have had added "bumps" like mileage, overtime, or meal penalties, and I've been pulled from the background to the position of stand-in, which is actually more of a "crew" position, with a higher base pay and a better level of treatment.

I had the privilege of working on a very high level project, and since the woman I was standing in for was not a blonde, I decided to buy a few wigs. Once I started wearing the appropriate wig for that job, it made me that much more valuable to the (very high level) director and cinematographer. Then just yesterday, my car worked for 10+ hours while I waited with the other 100 background artists back at basecamp, on a show that had some stuntwork on a freeway. And tomorrow, I'm back to standing in on another show (this time for a blonde, so whilst allowing this post to "stew", I've also been touching up my roots)! 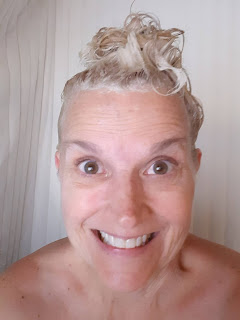 They say that if you find work you love doing, you'll never "work" another day. I feel that. How 'bout you?