A Timeline, to be updated? Or just continued?

16 - 29 September: work, walk, shop, live... do the things. Do All the Things #ActorLife #SetLife #Blessed
30 September: work on set, then later shop, walk, shoot video/photos of the neighbors' yards that are already decorated for Halloween. Some pretty good stuff, y'all. Trip on a sidewalk crack, fly like Superman, land on both of my hands, exchanging my keys for a biggish chunk of gravel in my left palm, and scraping my phone case (in my right hand) across the offending sidewalk. #10kSteps #ThePhoneIsUnharmedThankfullyBecauseThatsWhatsImportantRightNow #ButOwFuckOwFuckOwFUCKOwFuckOwFuckOwFUCKOwFuckOwFuckOwFUCK 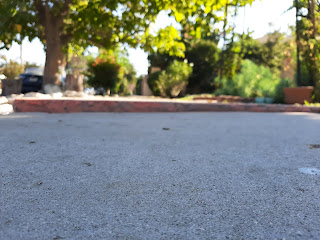 Hobble home, gingerly "holding" my bubbled left wrist with my just-beginning-to-bleed right hand. Greeted by the cats upon entry, burst into the ugliest ugly cry you've never witnessed. You remember the wives in Biblical and/or ancient Greek literature, wailing over their husbands slain in battle? That was me, for a solid 30 minutes, trying to rinse the dirt outta my wounds and figure out (not logically, no) why my fucking wrist hurts so fucking bad! Managed, somehow, in my pain and tears and snot, to call Rachel, the niece, the nurse. She's east coast and it's late. I get voicemail. I'm still crying and snotting and now apologizing for the hour, leaving a message that I have no hope of being understood in**. No idea what to do next.*
* Back before Covid, I had health insurance. GOOD insurance, through my union, SAG-AFTRA. Because of the loss of work, I also lost my insurance. No biggie, since I'm a pretty healthy person with a strong immune system, right? Well...
** Rachel's Google translate is hysterical! I hope she'll allow me to post the screenshot
Still the 30th, even on the east coast, Rachel calls me back. {She's an incredibly patient nurse, and also my very loving niece. I've been so #Blessed to be her auntie.} She talks me off my ledge, instructs me to take 1000mg each of ibuprofen and acetaminaphen, and also locates for me THREE nearish emergency rooms that I should get to immediately, if not sooner, because in her opinion, that left wrist is probably broken. At that point, I don't have the strength in either hand to be able to open the childproof OTC pill bottles, much less drive, and Stephen is at work without wheels of his own. So I knock on the neighbor's door, and they both open my drugs for me and give me a lift to St. Joe's ER. Rachel hangs up when she knows I'm moving in the right direction, and she expects updates, knowing I'll be on someone else's schedule for the next long while. Arriving at the ER, I send the neighbors home - no way I'm asking you to stay, since it'll likely be tomorrow before I'm outta here. Thank you kindly.
I get processed relatively quickly. I don't see a lot of what look like COVID cases (although I'm waiting in the "injured" half of the room and don't have the instinct to "diagnose" anyone in the other side of the room). X-rays are taken, and I'm so chilled to my bones, I'm afraid I've messed up the pics with my shaking. The tech assures me he got what was needed, finds me a toasty warm blanket to wrap up in, and parks me in a chair in the hall - no more lobby waiting for me! 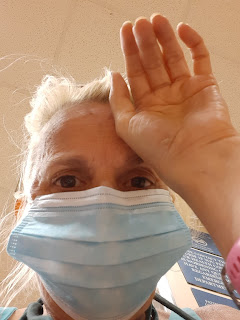 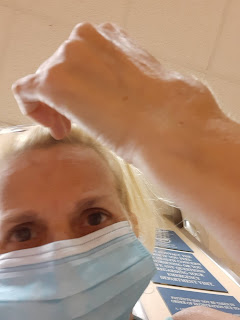 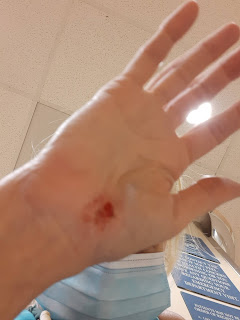 I'm sent to a room where I'm greeted by my PA, "Dr. Drew". He tells me I have a hairline fracture; tries to show it to me in the printouts of the x-rays, but I don't really know what I'm looking at. He tells me they're going to put me in a "soft cast" (splint), give me an Rx for pain meds, and refer me to an orthopedist I'll need to see in ten days. Then he hands me (or really, tucks into my bag for me) a bunch of papers, including the x-ray prints, and leaves the room to fetch the splinter-tech.
I'm joined by 3 young people, possibly nurses, possibly some other job label. I learn their names immediately, because that's what I do. I have, of course, since forgotten their names. It's been twelve days - gimme a break! The woman in charge is training the man, and the other young lady is also observing as training (she had been observing when I was first admitted). We four are getting along splendidly, and I'm trying to absorb all the same info at the same time. There was probably a pain-med injection early on, though, so I may have been a bit loopy. I don't recall.
The splint goes from my second knuckles around my elbow and back again to the second knuckles. I ask why so long, and the lead tech has me twist my right wrist, which I'm able to do (because it is not restricted to the elbow). I ask about the 10 days, and she says most patients are out of it sooner. Um, what? Of their own volition, or what? How does that work? They finish the dressing, ask if I have my discharge papers, and tell me they'll be back with Dr. Drew. Um, okay. #IDontKnowWhatQuestionsToAsk #IDontKnowHowToAnswerTheirQuestions #DoIHaveDischargePapers?
I'm left alone for a little bit, so I post pics on Fakebork and tag Stephen, because it feels like I need to go home soon, if they're asking if I have discharge papers... he calls immediately, in panic mode, because that's his SOP (which is why I hadn't reached out earlier), and while I can't give him concrete answers to his questions yet, I do assure him that I just need for him to come get me, and all of the details will be sorted in due time. He signs off, saying he needs to get permission to leave early (but sure it won't be a problem).
Dr. Drew et al return to see if everything's been done "correctly". I ask whether I need to pay a bill at registration or if I'll be billed, and Dr. Drew remembers this lovely California thing called "Emergency Medi-Cal", which is essentially Medicare for low-income under-65's (US). He sends the financial wizard in, and wouldn't you know? We qualified. Of course we did. So now, rather than waiting for Stephen to get all the way home on a bus, to collect my keys from the hook, and drive to get me, he catches a rather expensive Lyft to bring him to me and then us to home. 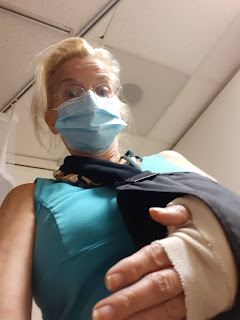 In the meantime, I still don't know that all of the papers that Dr. Drew had shoved into my bag So. Much. Earlier this night were, in fact, my discharge papers. I've been free to go! For a coupla hours, apparently! I meet the car in the drive, still wrapped in my no-longer-toasty blanket, and we get home, where I replay the events, and the cats finally get fed.
And then Cocoa stress-pees on the bed, and Stephen has to strip it for immediate laundering, and we've gotta figure out how to sleep before the next adventure! This was an awful lot to type, so I'm going to say... next post, a continuation of this epic saga! Feel free to chime in with questions or your own similar experiences!
Posted by emelle at 9:03:00 AM