I hate winter. I think y'all may already know that. I grew up in Miami, at a time when the Great Outdoors was just as good at watching your kids as the boob tube was. Maybe better. I dunno. Mommy didn't let us watch television, as a general rule (we had to ask to watch a specific show and could turn the set on as that show was starting), but boy howdy were we allowed to go outside and play. So, in Miami, it's always hot. ALWAYS. If you're a kid, you get used to that. If you get thirsty, you drink from the hose. You learn pretty early that on the hottest of days, you have to let the water run a little so you don't drink HOT water from the hose. But seriously, there's no such thing as winter in Miami.

After childhood, we lived in North Carolina. Where winter happens. And since it's East Coast, you still get high humidity, which means hot weather feels hotter, and cold weather feels colder. Did I mention that I hate winter? I think I did. In case you missed it, I hate winter. #ICYMI #IHateWinter 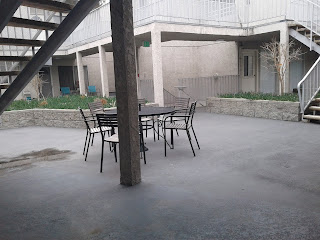 My POINT being (yeah, I know, get to the point already! Sheesh!) that when the weather begins cooling in the Fall, my body reacts like that of any warm-blooded mammal: I gain weight. I put on extra body fat, as if I'm going to hibernate. Part of my hatred of winter is a hatred of having to wear extra layers of clothing. Having to find clothing that still fits well, over the new layer of fat. Not being as active, because hibernation is a real thing.

So the real point is (I know, I know, this has all been a big tease. Shut up.) - at some point in late January, I decide to start walking more. I'll replace the battery in my nonFitbit thingy. I'll see if it'll talk to the app in my phone (it won't, but I still hold out hope). I start walking more.

In February, I made a concerted effort to add 1000 steps per day to my previous day's step count. It was hard, at first, because going from sedentary to a lot of steps in a week or so is hard, ya know? So I walked to the Y, figuring maybe I'd use the treadmill. I did. But the treadmill I tried out was non-traditional. It had a slope to it. It was self-propelled, rather than electric. I ended up walking only about 1000 steps on it. I'd find the sweet spot of where to walk, and it would somehow speed up. I'd lose my balance, grab the handlebars and step outta the sweet spot, and it would slow down (a lot). I gave up.

Also, I think I injured myself because it was so difficult.

It was a good day on set, overall, considering. But not what I was expecting. And then basecamp and crew parking were on an ungraded dirt lot. By the end of my day, I was in serious pain. Got home and found every remedy I could, and over the course of the rest of that week, I had applied them all. Heat. Ice. Elevation. Ace wraps. Epsom salt baths. Epsom salt foot soaks. Ibuprofen, of course. Topical analgesics. I bought a compression sleeve, Dr. Scholl's insoles, and a sturdy(-ish) OTC ankle brace. I tried a lot of things in conjunction with each other. The only thing that seemed to help with any regularity was the compression sleeve. I had a couple of days where I would try to walk, but my normal 3-3.5mph speed was drastically slowed to 2 mph. This is misery.

So I started walking by jogging on just the balls of my feet. I looked and felt silly, and also uncomfortable. No way I'm going to "jog" a couple of miles at 2mph! So I shifted. Left foot, step normally. Right foot pointed, land on toes first and gradually adjust the step to incorporate more of the foot. In fewer than 100 steps, I was back up to speed! Hallelujah!

But I didn't want to reinjure myself, so I popped in at a local Foot Doc. Made an appointment for a free consultation. Continued carefully taking longer and longer walks. At the consultation, I was advised to


Basically, what he told me is yes, I may have injured myself on that weird treadmill. Also, I have very high arches. And scoliosis. And a longer right leg than left. And good posture for someone with scoliosis, high arches, one longer leg, and tendonitis. So I need to not exacerbate my condition. Walking is good for me. Powerwalking is fine. But not if I keep using the tools I had tried. So I'm gonna get custom orthotics, and probably some new sneakers. Sheesh.

And OH, I just remembered... in the month of February, I DID hit 20,000 steps one day. But I also stepped in a crack in the sidewalk instead of on it, and took a header. I'm grateful I didn't get a concussion or bite my tongue or break my teeth or jaw when my chin hit the sidewalk. It sure did hurt, though.

... so that's just some of the catching up I wanted to give ya. Specifically in relation to "how many steps I took this month", wanting to work my way back into my beach-ready body, hurting my ankle, and hurting my chin, and all the ways those things relate to each other.
Posted by emelle at 4:55:00 PM