So I've mentioned I volunteer for the SAG Foundation. I've also mentioned that I've been actively taking classes at the SAG Conservatory. Recently, I signed up for a class at the Conservatory to orientate (?) new volunteers there, and ended up getting added to the roster of volunteers as soon as that class session ended.

Just before March began, the schedule of all classes that needed volunteers was emailed out, and because I responded immediately, I was booked for 4 classes, two on the same day but with a long break between them, and then the other two later in the month. Then on the 1st of March, I got added to another class (which is actually tonight).

I was booked for work on set last week, on the day that I was scheduled to volunteer twice. So I had to "call out" and get a replacement. I know they replaced me for the evening class (I honestly knew beforehand that they would, because that instructor is my favorite, and that's probably a consensus amongst students there). I hope they found a replacement for the morning class. I was bummed that I had to miss both of those, because I'm nervous about my first time. I have to set up the camera and record all the sessions and then play those back and give people copies on their cards or drives, and although I took copious notes in the training sessions, technical stuff is not necessarily in my immediate wheelhouse, and I haven't had a chance to "practice". So wish me luck that I don't completely #FuckItAllUp tonight!

*** Also, #ICYMI (because I neglected to actually STATE it), #AnyDayOnSetIsAGoodDay and I'm #Blessed to have missed my volunteerism for work. #SetLife #WorkBegetsWork #WorkIsAGoodThing

Ennyhoo, let's get to the really good stuff - the title of this post! 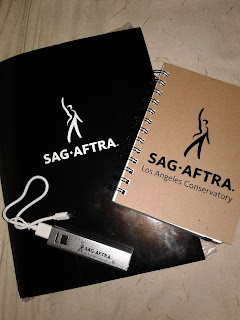 At our very first orientation class (there were two, actually), we were shown upon arrival where all the goodies were kept. Snacks. Beverages. Folders and tins of mints and plastic luggage tags and notebooks with nice pens and phone chargers. SWAG (Stuff We All Get). Good, cool, free stuff, just for saying "yeah, you can have my time". I ended up with a few of those phone chargers. They're great when you're on a set that has limited electrical outlets. They work for both my phone and my tablet. It's awesome. #Grateful #GreatFull

Near the end of last week, an email went out to ALL of the volunteers looking for participants in an AFI student film "loop group". I have taken a few looping classes at the Don LaFontaine VoiceOver Lab at the SAG Foundation, so I (of course) immediately signed up to participate.

*Looping is the recording of voices for a film or show, done after principal photography, to either replace onscreen dialogue or fill in dialogue that wasn't shot on-the-day. It can be the background conversations of random people on the street or in the restaurant, or it can be PA announcements in a train station or hospital, or it can even be grunts, moans, and breathing. It can be a lot of things. It's all recorded at full volume, and then edited in very quietly. It adds to the scene we see, without overtaking it.*

At any rate, the six of us who replied most quickly were picked, and we showed up to a home studio in the middle of nowhere to record all of ^that^ kind of stuff for about an hour/hour and a half. The home studio was amazing. It made me a bit jealous (#TotesJelly), because it was so well constructed, and it exists in someone's house. Because it's a student film, none of us will be paid for our work. But we will all receive credit, and I'm going to find out whether that "day" "on set" counts towards my health eligibility. Because I think it might!

Now I just have to survive tonight.

What about you? Do you currently volunteer for anyone? What unexpected blessings have you received from it? Let's chat!

Email ThisBlogThis!Share to TwitterShare to FacebookShare to Pinterest
Labels: #100happydays, #Gratitude, blogging, film, handiwork, hashtag this, it's a puzzle, LA