Where to Begin, to "cover" two years?

7:38 p.m. I can't just re-read my words. I have to re-read them aloud, because I'm more actor than writer, y'all. Sorry it took me 1.5 hours to read 17 posts. #ImADumbass #IIncludedTheOneFromThisWeek

2019 ended with plenty more work and plenty more volunteerism and probably a Christmas party or a dozen, notably at the SAG-AFTRA offices, among other places. We worked and earned some money and made some contacts and lived our fucking lives. All of us did. None of us knew.

2020 began and I continued booking background acting work. I was on set, photo-doubling for Cloris Leachman in scenes she was not able to shoot (yes, I was wigged and dressed and absolutely not shot in such a way you'd know it wasn't her)... and then the world learned of "The Chinese Virus"... and the production did everything right from the word "go"... masks and hand sanitizers and temperature checks and no more communal buffet-style catering or craft services... and I had one last day to go, which got cancelled without notice, but I guess "Finger of God" is sufficient excuse not to pay anyone for that day of work, so at the beginning of April, I filed for unemployment. By June, I'd lost my health insurance coverage (as I'd lost my eligibility by the end of March).

At some point early in 2020, Stephen was hired by Dodgers Stadium. The hiring process took some time, what with interviews and assessment tests and start paperwork and getting uniforms and such. And then the stadium cancelled the season for the foreseeable future. So every week, we'd get a direct deposit of $0.00 from Dodgers Stadium, so we'd know that Stephen still had a "job" he couldn't go to. So he filed for unemployment.

I don't remember when our apartment manager Marge died, but her husband Jack, who'd been the handyman for the building, became the manager by default, and then he got very very ill... in March or April of 2020. And then he died. We have no evidence, but we believe COVID got him. We were all pretty sad to lose Marge, but we were hit hard when we lost Jack. Everything was shut down! Everyone was home, all the damn time! Keeping our distance and wearing masks and stuff! Jack probably contracted it doing a small repair in someone's apartment, or working in his garage on somebody's car. He was probably ready to be reunited with Marge, but I hate to think how he probably suffered in his last days. And none of us knew. 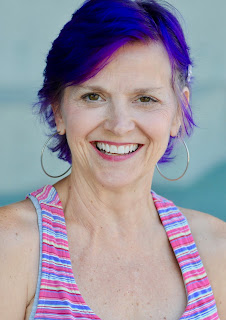 Once I knew I wasn't going anywhere, I dyed my hair purple (temporary dye). Got new headshots in August. 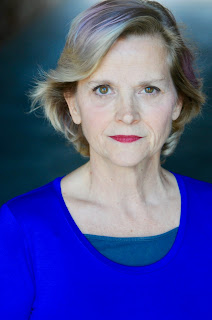 Then it grew/washed out a fun streaky silver. Got new headshots in November. 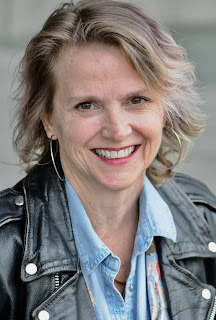 Then I dyed it purple again. Then it grew/washed out a less-fun streaky silver but mostly dirty blonde. Got new headshots in February of 2021.
*short tangent* Then in April, both of us qualified to get vaccinated. So vaccinated we got. When they ask us to get boosters, we'll get 'em. #CrushThisFuckingPandemic *end tangent* 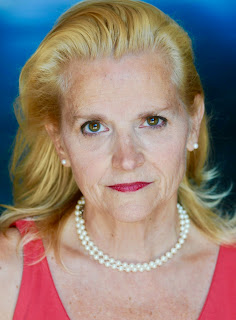 Then I went back to "my" blonde, but did not return to my pixie cut. Got new headshots in June.

... and "life" went on. We were staying abreast of developments, and that meme showed up, and I dove headfirst into online training, since in-person training was "over". And unemployment was supplemented, and extended, and supplemented again, and extended again, and so on. And there were stimulus payments. And God Knows, if there had been work for either of us to do that could have been done without risk of contracting a killer disease, we'd have gone back to work. We didn't stay unemployed because it paid more than employment. We stayed unemployed because it was all we could do.

I honestly don't even know how I managed it, but I got us out of debt, y'all. #Blessed and #IAmAMoneyMagnetThankYouThankYouThankYou ... got us out of debt, paid off the car and EVERY single credit card, and bought a lot of online trainings. Got set up in my home VO booth and connected with an author ("rights holder") on ACX and started producing his audiobooks. I set my finished hour rate, he agreed to it, and he just keeps throwing "one more" book at me. #VOActorGettingPaid #18BooksAndCounting

Still and all, our income tax return for 2020 looks like we're just out of college and newly married. The lowest income - TOGETHER - that either of us can remember making, in our personal histories of filing earned income taxes. And no real hope of an end to the pandemic in sight yet.

BUT the Dodgers returned to the stadium! And Stephen now gets more than $0.00 deposited most weeks, because he is gainfully employed (part-time, but still)!

I somehow got "found" by a manager in January of 2020, and after a longish "false start" to that relationship, something compelled me to reach out and figure out how to improve that relationship (get new headshots when you dye or otherwise change your hair). I've become a go-to actor/intern/technology goddess, and I have had more auditions since 2019 than I ever had in my career prior. No bookings yet, but I have at least two casting directors who invite me repeatedly to audition for their projects. Which means it's just a matter of time. #WhatsForMeIsForOnlyMe

... and in the last month or so, I've finally told my calling service (for background acting) that as long as auditions are self-taped and not live (whether in-person or virtual), there is no reason I can't be working on #SafeSets. Which means, because of COVID testing protocols, for the past 4 weeks, I have averaged ONE day per week where I didn't have somewhere to go for a production (which means I'm averaging 4 paid days of "work" per week). And because my hair is not a pixie cut, I'm back to working on "period" pieces, where I have fittings and personalized hairdressings and makeup not my "norm".

ALSO in the last month or two, Stephen and I decided that it was time for us to own a home. We started house-hunting in earnest, working with a realtor to see what we could likely afford, and reaching out to lenders to see what "the system" thinks we can afford.

Unfortunately, because of that just-out-of-college level of income for 2020, we've had to put real estate on hold until we can compile all of our verifiable 2021 income. In the meantime, we stay busy with work, we certify for unemployment (because part-time income and/or dayplaying, as I'm doing, is still not fully employed, and therefore underemployed, even if either of us earns too much in a week to be eligible to collect benefits). The last known "extension" ends by September 11th, and neither of us is even in that extension, so unless the pandemic brings government back to addressing unemployment extensions or supplements again, when either of our "banks" runs out of money, so do we.

And I think you're now caught up! Which means that I just have to not get so busy that I neglect you again! What shall we talk about next? Comment below!