So I worked a total of three days in January, and that was GLORIOUS. I mean, I really thought it meant I'd be working my "regular" shift of at least once per week, throughout 2017, until the Scripty gig for that show I'd worked in the late summer picked up for season two (which would mean MORE than once per week). So January left me feelin' pretty good about myself and my industry.

And after I marched in the #WomensMarch, I crocheted myself a Pussy Hat.

Then I crocheted a smaller version, thinking one of the young nieces (or nephews, 'cuz I won't say no) might want one. No takers, so I unraveled the thing and made another Moebius Scarflet to match my Pussy Hat. Because, why not? 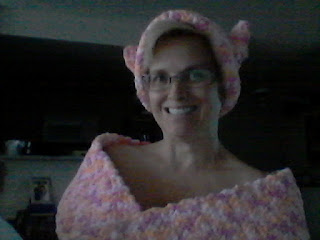 Meanwhile, I kept looking for work. I ran into one of the actors from last summer's show, and he told me that he'd been contacted about going back to work in late March. It makes sense that they'd contact the cast before crew, because you have to build your shooting schedule around their availability. He also told me that the writer/director had gotten his SAG card in the meantime, so there was a good chance the project would be a SAG Signatory. That's great news for the cast, and it's not bad news for the crew, because IATSE Signatory comes next (usually by Season 3). So I shot an email off to the director/writer, checking in, congratulating him on his Union status, and hoping to hear back regarding crew scheduling soonish. This was February, so it's not like I had any worries. Just trying to do my own "due diligence".

But I did not work a single day in the month of February, and Depression crept in. I reached out to the producers on Friday (March 2), and the email response that I received, pretty quickly, was that they were all crewed up but thanks for checking in.

WaitOneFuckingMinute.
When they (the production) made the announcement that there would, in fact, BE a second season, one particular producer seemed to go out of his way to Promise Me the gig.
ButThePeopleWhoWorkForYouHiredSomeoneElse?
What.The.Fuck.Is.Up.With.That?

Now, if you know me at all, you know that ANGER is not one of my go-to emotional states. Sure, there are things that will piss me off, but I usually get over those things and get back to Optimism or Joy or at least OKAY. But for most of Friday, I was LIVID. I couldn't see straight. My world was burning.

And then, when I finally was able to focus enough on "now what?", I got really sad/upset/crying... about the fact that I had somehow done something to lose a "promised" gig.

I called Warner Bros., because when my temp assignment ended last year, I was told I should reach out to HR if I wanted to come back. The job I had done for them was listed on their careers website, so I went ahead and completed a new application. But the group assessment for potential new hires had just happened on Thursday, so my odds of "perfect timing" were 50/50.

And I continued submitting for other appropriate gigs, and Wouldn'tYouKnowIt? I booked work for tomorrow. It's a semicasual background role on the last day of the season for a show I've worked very sporadically in the past. It should be a pretty laid-back day, from what the casting director has said, and it should (hopefully) reboot my psyche back into "work begets work".

Aaaaaand I made another thing. It's amazing to me that crocheting has such an impact on my mood. I started this thing on Friday, and finished it today. It's a prototype, really, because I can't figure out when or where I will actually ever have a real opportunity to wear this rather-dressy-while-still-very-casual "summer sweater", out in the real world. But I made it myself, without a pattern, tweaking as I went along, and I'm pretty happy with it, for a first attempt at brain-vomiting a wearable thing. 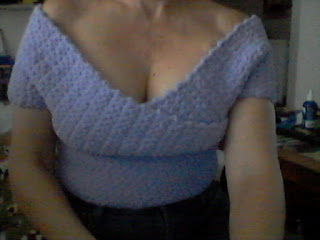