Labels and -isms (Fair warning, this is a long one)

I am not what you might call a Feminist, nor an Environmentalist, nor an Activist. I often doubt that I am an Artist, although I think when I doubt that particular label, it's because my Depression is Lying to me.

I was, for most of my life, the most apolitical person I knew, and possibly the most apolitical person you knew. Then the presidential election process got jiggy in 2016, and while I still did not cast a vote (because I live in a state that I knew would overwhelmingly go to Hillary, I knew that any vote I cast for or against her would not essentially "count" in the overall process), I became somewhat more outspoken about my fears of if we, the U.S. of A., followed the Brexit path. (i.e., the American public elected the orange-faced monster)

I started re-tweeting all of the anti-Putin's Puppet stuff that crossed my Twitter timeline. Those tweets made it onto my Facebook page. I became angry and upset and even more frightened of the potential outcome.

When the popular election went to Hillary but the Electoral College initial result went to the Cheeto, I was even more convinced that my reasoning behind not voting was valid: my vote wouldn't count. I furiously re-tweeted anything that had to do with attempting to sway the EC voters to vote their consciences, rather than whatever their states had somehow mandated.

When the EC vote followed the old rules, I became even more intensely frustrated and angry. How was it possible that thinking citizens were allowing such an -ist to become MY president? He's proven himself to be "ableist" (when he blatantly mocked the disabled reporter and then lied about it), misogynist (when he talked about "grabbing 'em by the pussy"), racist (all the time, but specifically when he mentioned building a wall and having Mexico pay for it), elitist (regarding anything to do with the working class), etc. He is an outright LIAR, and he's breaking Constitutional Laws by not divesting himself from his businesses and releasing his taxes. The man is Not Fit to serve, and he's made it clear he has No Intention of Serving (us, the citizens of the United States).

But a few days ago (one or two before the inauguration), I decided that my online actions weren't doing anything positive. I was only becoming more angry and anxious by re-tweeting all of that negativity. So I made a vow to myself to focus my online energies towards positivity. If there was something that was Anti-HIM but FUNNY, I would give myself permission to RT because it made ME laugh, which meant maybe it would also help others to laugh.

I also decided that, if I were able, I would physically participate in the #WomensMarch, specifically the #WomensMarchLA. I went online to the "register for a local march" page and found that there were actually 3 marches in Los Angeles County. And even though Beverly Hills and Pasadena were both closer (geographically, as the crow flies) to my apartment in North Hollywood, the Downtown LA march was easier to reach. So I signed up, and there was only one thing (other than somehow working today) that would stop me from going: rain. Yes, I'm being honest. Rain would have stopped me (and likely ~100,000 others) from attending. Also, I was a little bummed that I hadn't crocheted myself a pink pussy hat (didn't know how to crochet in other than a straight line, and hadn't bought any pink yarn). Maybe somehow, I would acquire one at the march, if it didn't rain.

So I got up this morning with my standard 7:30 alarm (which, under normal circumstances, I would've just told to "shut up" and then gone back to sleep), got dressed, ate a little, and then walked over to the subway station to catch the 8:10 train to downtown. There were a lot of people at the subway station at 8 o'clock on a Saturday! There were people milling about on all levels (ground level and subterranean), including some Anti-#WomensMarch protesters. That was weird.

But I got downstairs and onto the platform, which was PACKED. When the train arrived, we were the last/first stop, so once it emptied, we FILLED it. I was going to take a picture, because it looked like a New York subway car, not an LA one. But I didn't, so you'll just have to imagine it. Or find Rene Auberjonois' tweet.

I knew where we were getting off, but I wanted to be more sure of how many stops it was. So I asked some of the ladies near me to check the map on the opposite wall, to count the stops. Everyone around me was buzzing with excitement, trying to assure me that there was no way we'd miss our stop, but they also followed through on my request. Then 3 people in the middle of the path to the map realized that, for whatever reason, they really didn't want to go to Pershing Square with all of us #NastyWomen, so they exited the car. Their spaces were quickly filled, though, and each stop our train made was met with a crowd. We only had room for "one more" at each of those stops. I dunno, but I hope the LA Metro system added a few trains this morning, just to get everyone there. I know the organizers of the event could not have predicted the attendance; I wonder if Metro could. They did allow all of us going to the event to ride for free, though, which was a nice thing! No driving, no parking, no paying for transpo TO! Yay!

Arrived at Pershing Square and was already impressed by the turnout. 8:30 - 8:45-ish, and these are just the folks getting off the trains with me (and queuing up for the porta-potties) 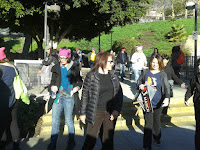 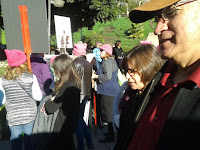 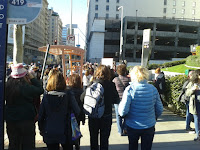 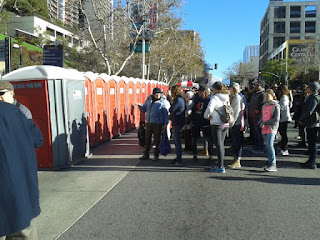 Then I made my way over to the "front" of the march. I passed a group of sign-makers in the middle of the street, and got their permission to take this photo: 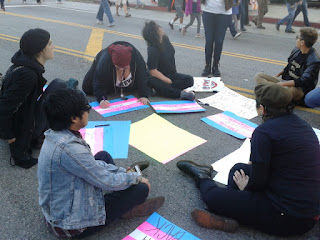 Continuing on to the "front", I passed the motorcycle cops and then a motorcycle "gang" (that I will join, as soon as I have acquired my requisite motorcycle). They ride every Tuesday evening. 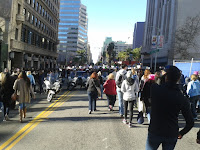 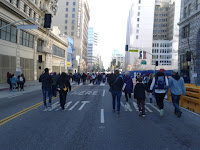 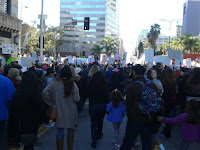 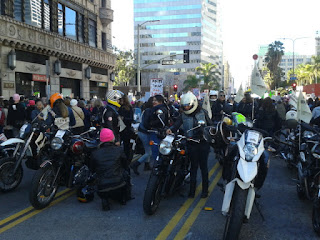 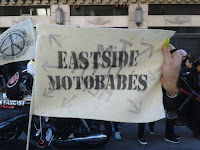 Finally found where the march was intended to begin, and worked past the folks holding the street-wide banner. The crowd was getting crowdier, and the one thing I really wanted to accomplish was capturing the scale. That desire was shared by the people I shared street space with, but alas, when you're 5'3" in the middle of an already-crowded street, there's just no hope of capturing the sheer number of people on a simple cellphone camera. Here are my attempts, though: 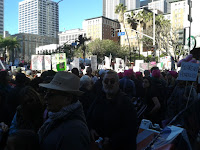 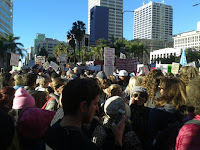 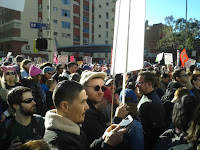 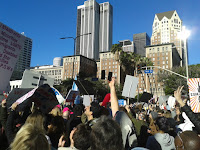 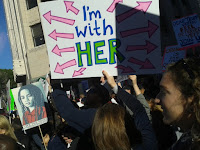 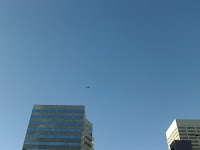 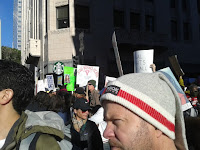 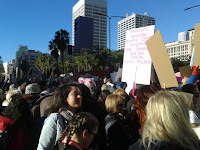 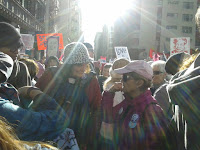 By 9:30, we were getting antsy. Wasn't this thing supposed to start at 9? I thought maybe, since there were so many more marchers than originally predicted, the organizers had pushed it to 10. Judy says there were speeches at 9, and the march was supposed to begin at 10. But we were at the "front" of the line; where were these supposed speeches? And Why? I came to participate by Moving Forward, not standing still and listening to rhetoric (not that I was anywhere near the alleged rhetoric). ... Shortly after 10 a.m., we "older" folks began complaining of pain in our knees, hips, and low backs. So the chants began "Begin the March! Begin the March!"

And then a firetruck arrived. Apparently, someone behind us had fallen, or something. The firemen were meant to lend assistance, but there were too many people blocking their path, and the trucks were blocking the path out of the way for US. Some celebrities showed up, led by organizers, and they were walked forward, past us and the trucks. Then some "groups" were led through. Then some of us who'd been waiting rebelled a bit and tucked in with those groups. Judy and Nancy and I made it past the banner. We made it past firetruck #1. We inched along and made it past firetruck #2.

Then a random dude with a megaphone prop and a lanyard and a non-march badge climbed up on top of firetruck #2 and started riling us up. He was SHOUTING, because his megaphone was nonfunctional, although he kept "acting" like it was working, even though he was only getting a response from those of us who could actually hear him. But his nefarious plan worked. The crowd started moving, like a march, forward, towards the "goal".

We didn't actually move as a group until 10:39, so we were good and ready to not be standing still. But frankly, it was a good energy, at all times. There were so many people there; men and women and those identifying as such. Small children, old ladies, every color and shape and size and age and sex and such an amazing group filled with love. There was zero negativity, other than the #NotMyPresident sentiments. We were all there supporting each other. There were people moving forward, and people lining the sidewalks, not walking, but holding signs and wearing pussy hats and cat-onesies and pink and leather and whatnot. And SMILES. Everyone was "Pro" each other.

And today, I was a Feminist. And an Activist. It felt good, no matter how badly I'm going to ache tomorrow! ... and I still don't have a pink pussy hat, but I know how to make one now, if this sort of event shows up in my path again.

Have you ever participated in an -ism event? In what way did you participate, and what was the general outcome of your experience?

Email ThisBlogThis!Share to TwitterShare to FacebookShare to Pinterest
Labels: #100happydays, depression, handiwork, hashtag this, it's a puzzle, LA, steps