A Spoiler-Free Movie Review, and other catching up

#AvengersEndgame was released in theaters on Thursday night. Our local theater had not sold out for opening night, when Stephen got off work and checked. But it's a three-hour movie, and we'd have gotten home close to midnight, and he still had to work Friday morning. So on Thursday DAY, I bought our tickets for today's first showing, at 12:30.

We didn't see it at a multi-plex, per se. We saw it at a Laemmle Theater, which is half arthouse and half blockbuster. They host themed #ThrowbackThursdays, as in, for the month of May, they'll be honoring Diane Keaton's career every Thursday. Because of the nature of their business, we weren't sure what to expect at today's matinee. We planned to get to the theater before noon, so we could (hopefully) just walk right in with our tickets, plant in our favorite center seats just behind the rail, and then get Stephen's popcorn combo just prior to the trailers at 12:30.

So we left the apartment at 11:30 and walked down the block the slightly-less-than-a-mile... and discovered a queue that nearly went around the adjacent building. Nearly. The sign at the front of it asked patrons to have printed out their e-tickets (No, not like the old Disney "E" tickets) before approaching the box office, which meant, yeah, most of the folks in line would have already paid for their tickets, like us. No cutting for us! Dangit!

But the queue began moving right around 12, and it wasn't long before we were finding our second-best seats, which were slightly-left-of-center, just behind the rail. I got myself a complimentary cup of soda water, and when Stephen trekked out to hit the can, he made it through the concessions line pretty quickly, too. I mean, kudos to Laemmle NoHo, for having their act together today. I imagine that they'll have the most business this weekend that they've had in quite some time.

And now for your spoiler-free review. No, wait. Before I tell you MY experience, let me pause for a short rant. *** There are entirely too many people (trolls) out there in the media and social media and the internets and the YouTubes who are posting VITAL information about this movie. EVERYWHERE you turn, there are articles and videos about "what you missed the first time you saw Endgame" or "3000 Easter Eggs you didn't notice", etc. STOP IT, "news" sources and other "fans". Everyone who wants to see this film wants to take it in for themselves. No one wants to know who lives or who dies by the end, before getting to see it happen on that giant screen. *** End rant.

So, here's what happens: um, NO. IF you saw #AvengersInfinityWar, then you know some very important information about what you're expecting or hoping will happen in #AvengersEndgame. If you DIDN'T see Infinity War, then do you seriously have interest in Endgame? What are you even doing? Move along, little dogies, move along.

Okay, back to what I was saying. Infinity War was a rough watch. It was violent and brutal and so many people that we fans of the MCU have come to know and love DIE in it. After watching it on the big screen, I walked away ANGRY (and sad). I did NOT want to hear what any pundits thought might happen next. I did not want to watch it again. That said, over the course of this last week, Stephen and I have been binge-watching (in order) every Marvel movie that had #InfinityStones plotlines, so that we'd be caught up by today. We did watch Infinity War a second time, and while I still hated the outcome, at least I wasn't angry this time around.

Endgame starts pretty much where Infinity War leaves off, and then we jump forward five years to see how the survivors are doing. When Scott Lang finds them (which you've seen in the trailers), they form a plan to attempt to unravel all the bad stuff created by that douchecanoe twatjuice dickwhistle Thanos. So the bulk of this film is coming up with a viable plan and then acting on it. There's some fighting. There's some remorse. There's some really funny shit.

We laughed a lot. We cried a lot. There are successes and obstacles. And we (the audience) stick with the heroes, hoping and wondering and wishing and cheering through all the trials. And there are still sacrifices to make, and we the audience mourn those choices as well. There are a ton of cameos by people we haven't seen for some time (they do time-travel, as you know from the trailers). So the end credits sequence is stunning, giving credit for all of the cameos, including a couple that may have ended up in cut scenes (so look for them in the DVD/Blu-Ray editions, like we'll be doing, kids). There is no mid-credit scene. There is no end-credit scene. There is only the movie.

We liked it. All of the MCU films have led to this one, and while it feels like "closure", I can't imagine that the stories are all wrapped up. I do hope to see more of my Marvel heroes going forward.

AND shooting both a multi-cam sitcom scene for a USC student and the voice of Gloria, the most intelligent being in the galaxy, who also happens to be a worm in a jar, for an AFI student film. Both of those were great fun to do, and I think I made some pretty good connections. We'll see.

I created a professional actor's website, and I've been recording kid lit audiobooks for the nieces and nephews. Then, after a great VO class, I re-recorded them, and I've been going crazy with those recordings. They're not sweetened with music or sound effects, but they are "clean" recordings of me reading to littles. You can take a listen here, if you like. 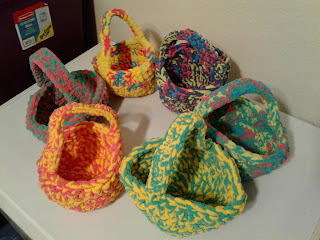 I need to get back to Jo-Ann Fabric for more yarn. I sent the Easter baskets out to the two families of young children in my family, and then while I was on the sci-fi set, I built myself a craft bag. I quite enjoyed that, so I think I may make more of those.

Oh, and yes, I'm still eating Keto, as well as doing daily yoga. I haven't yet shed a lot of weight, but five pounds did budge within the first two weeks of those practices, so I'm confident that I'll shed another five to ten pounds, and get pretty strong again. Doesn't hurt that I'm also trying to hit 10,000 steps most days, also. The Achilles tendonitis is gone/healed/cured. I feel pretty good!

So what about you? Have you seen all of the MCU films? What did you think? Any other catching up in YOUR life you'd like to chat about?
Posted by emelle at 9:41:00 PM