How Does One Dress for This Weather?

Got up super-early so I could get to the set of The Muppets by my 7 a.m. call time, and even though I knew what I'd be wearing today (I play a server in Rowlf's Tavern, when they use me), I happened to look at the weather on my phone just to see what the temp was in that hour. 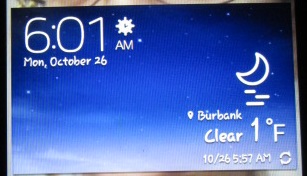 *****
Think about that statement, kids. Ten years ago, no one would ever have made that statement: "I looked at my phone to check the weather". Right? Technology = Weird.
***** 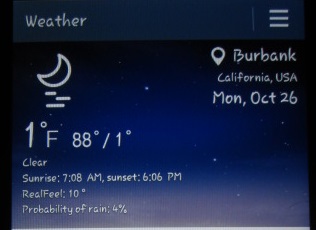 Ennyhoo, I'm glad I knew how to dress today, because if I'd gotten up with no plans for the day, or with slightly later plans that involved an early drive, How The Heck Would I Have Dressed?

*****
Just in case anyone's concerned that I've "disclosed" something I'm not supposed to, my first episode as a server in the bar has already aired, so you've probably already seen me (I know I did), and you probably already know that Rowlf has a bar and I serve there. No NDA breakage. Thanks for your concern. :)
Posted by emelle at 9:52:00 PM

Email ThisBlogThis!Share to TwitterShare to FacebookShare to Pinterest
Labels: film, it's a puzzle, LA