Work in Progress... until you get to read it, of course.

Our Christmas to ourselves was a new 5 cubic-foot chest freezer. I ordered it on Friday with expectations of delivery sometime between then and today. I'd gotten two voicemail messages on Friday while I was at work, one saying that our "item" was not in stock, and we'd be "pushed" until Wednesday. The second message was automated, telling us to expect delivery of our "order" on Saturday morning. That would have been fine, but neither of us was going to be home to receive it in the two-hour window we were given.  So first thing Saturday morning, I called back the number attached to the automated message, spoke with a real person who could not help me reschedule, and then was transferred to the delivery department of Lowe's (the first message). The person I spoke with there never mentioned my "chest freezer" but indicated, "oh, yeah, we got 'em, and it's coming out today in that timeframe". Um, no, we have to reschedule. Since today was the first day either of us I would be home all day, that was my first choice (we could have gotten it yesterday, but may not have been home in the "window"). Great, no problem. No window given at that point, just "Monday". Yay.

Was very dressed up and went to work, a little nervous about my new haircut (since I'd hidden it under a Santa hat on Friday). On my way in, got insurance company phone calls regarding the accident that had happened in the parking lot. Arranged the repair shop stuff, and intended to take the car in today once I knew what my "order delivery" window would be. Got home from work Saturday and informed Stephen of all the goings-on. Slept in a little yesterday and then headed out to do a little bookkeeping for a lady whose books I used to regularly keep. ;)

Last night, Stephen made his very first lasagna ever, and I got a new automated message telling me that my order would be delivered today between 9 and 11. Excellent.


At 7:55 this morning, I was awakened by my phone. A young hispanic voice was telling me that my Lowe's delivery was ten- to twenty-minutes away, and was there anything special I needed to tell him? Only that we live on the second floor, with no elevator. He said, "okay, that's fine. We'll be there in twenty minutes."  So I got up, put pants on, turned the coffee on, and came out to start moving the little shelving unit that has been living where we were planning to put the freezer. Before I knew it, Stephen was calling out from the bed, "it's here!" and I opened the front door before the dudes had a chance to knock.

Freezer unpacked and set up and signed for and dudes out the door by 8:08! So now (9:03) I'm just waiting to hear back from the repair shop so I can take the car in. So much for sleeping in; on the bright side, I've definitely been productive enough to warrant a nap!

*****
Getting ready to post this now (it's just shy of 2 p.m.)...
got the car dropped off; the rental picked up - they were planning to put me in a "full size" vehicle, since I didn't have to pay for it, but c'mon, kids! This is LA! Gimme the smallest car you got on the lot!


(Nissan Versa, which is actually the second smallest they had, and classified as "mid-size". Oh, well.) - and then off to Costco to get freezer-fillin's.

Home now, have had the last glass of champagne until New Year's Eve, and didn't manage even a drop of eggnog this season! What?
UPDATE: Oh, Marie Callender's Chicken Pot Pies, how I have missed you! 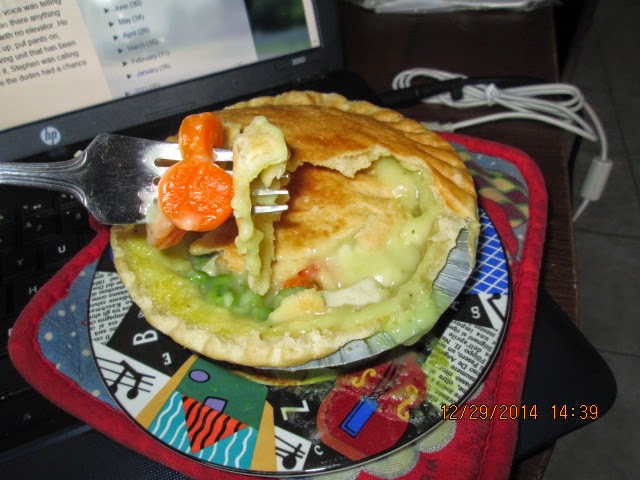