When Daddy and I got up and headed out to swim a little earlier than normal today, we didn't know what to expect.  We'll need to do it again tomorrow, since Stephen and I will pack everything up into the car in the morning after our swim (he's been writing during my pool time with Daddy), and head north to Charleston with the cats for a coupla days.  What Daddy and I found today was an empty pool, crystal clear, and just slightly cooler than in previous days.  Tomorrow's pool will likely be empty, crystal clear, and just slightly cooler than today (it did rain today, but I think the sun came out hot enough and for long enough to not allow the rain to cool the pool too much).

Once in it and exercising for a bit today, we were joined by a lovely family of two older ladies and four little girls.  The youngest one was tiny, bubbling energy and personality bursting forth from her cherubic face and overtaking the full lifevest floaty she wore.  The three slightly older girls had goggles and energy, and were quite capable.  The youngest one started swimming towards Daddy, and was encouraged to do so by the woman who was holding her in the shallow end.  And swim she did, dog-paddling all the way over to him, HUGE smile on her face.  What a doll.  Daddy, of course, gave her a penny (since she'd not be diving for it).  This brought the big sisters over, and before you know it, everyone had claimed a penny and new friends in us.

I stayed in the deep end, treading water, watching, admiring, enjoying the boundless energy and not being splashed.  Eventually, the oldest started doing belly-flops into the shallow end, and so all of the grownups started offering encouragement ("bend your knees," "keep your head down," "push off with your feet"), until finally, I was drawn into coming closer. 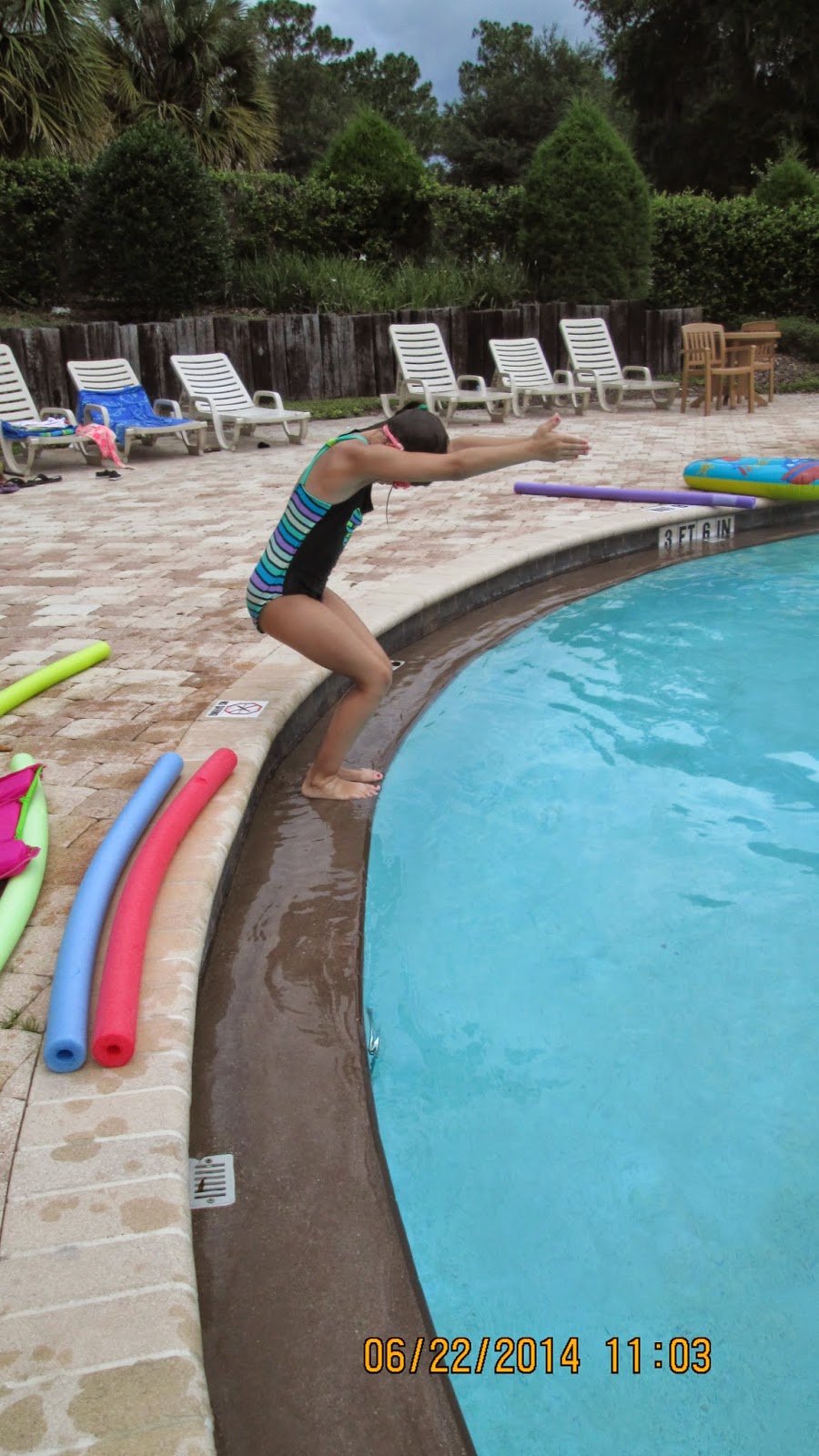 I convinced Talia to come around to the deep end (6', I think), so she wouldn't accidentally "dive" in the shallow end and become a terrible statistic and the reason for all of the "No Diving" signs and tiles posted EVERYWHERE.  I showed her how to "fall in" headfirst, but she was unable to copy it, because her instinct was to arch her back and lift her head, so, more Bellyflop City.

Then we SAT on the side, and I showed her how to "fall in" from a seated (or nearly seated) position.  That made more sense to her, and really, I just wanted her to get a kinetic sense-memory of the head hitting the water before the belly.  We were relatively successful.  I won't get another chance to work with her tomorrow, because all of the girls are traveling back home tomorrow, wherever that may be.  But we spent plenty of good time with all of the girls and their lovely Nonas, who were grateful to me for having taken an interest in helping Talia.  I had thought nothing of it, if you must know.  I know that I'm a great Auntie, and in my family, if you treat us like family, you're getting adopted.   So today, we adopted Talia, Zara, Fia, and Kira, and both of their Nonas.

Eventually, the stormfront came through.  Thunder let me and Daddy know when to get out of the pool, and with the girl family out at the same time, we were just drying off long enough to get in cars to go home.  In the dry-off time, Fia asked me very nicely if I would teach her how to dive when she's seven.  I asked when she would be seven, and she didn't know.  But she did know that her birthday is in October, and that she is now five.  So I did some grown-up math and told her, "IF I come visit my Daddy (pointing at him) in October of next year, 2015, and IF you come visit your Nona in October for your birthday next year, 2015, then I would be happy to teach you to dive.  But I think you'll already know how to dive by then."  At which point, Zara picked up my line of thinking and carried it home. "Yup, when Talia knows how to dive, she's going to teach me, and then I'll teach Fia."

We were both so impressed with these girls.  They were friendly, to us and to each other.  They were clearly very smart.  They were sweet.  And they had beautiful Italian names and were proud of their uniqueness ("no one in my whole school has my name," Talia told me with a smile).  I'll miss them!
Posted by emelle at 6:36:00 PM

Email ThisBlogThis!Share to TwitterShare to FacebookShare to Pinterest
Labels: Steph