A Message For Lee (well, and anybody else, too, for whom the circumstances may apply)

The Strangers are missing you. I finally got caught up yesterday and today on reading all of the blogs that are linked here in my sidebar, and what I noticed in the comments of more than one Stranger post was this question: "Where is Lee?"

So. If you (Lee, not Lee, whomever you are, Dear Reader) are a regular reader/commenter on any blog, I encourage you to revisit the blog(s) you used to frequent, and comment on one or more posts, just so the other people who frequent that blog won't worry about you. Thank you.

In other news, I drove to the old 'hood today so I could get some steps in and complete a coupla tasks. In between tasks, I stopped at the car to drop off/grab whatever stuff I was carrying/needed to carry for the next task. When I locked up the car the last time, someone pulled up and parked behind me. I paid no attention to this other driver; we were both just parked. I walked away to complete more tasks.

Approaching my car on my return, the other car was no longer there, but there was a note under my wiper: 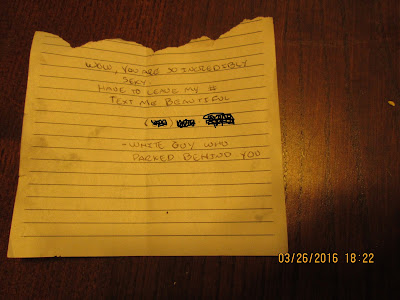 I laughed when I read it, because it did make me feel good in the moment. I already felt like I looked good today; I'd already been complimented on my appearance by people who know me. But this was a brave stranger who put himself "out there" and hadn't been rude with catcalls or whistles.

I have no intention of calling or texting this dude. I had suggested to Stephen that he send a text message to the effect of "thank you for complimenting my wife; she was very flattered" or something. No dice; he laughed when he read it, too, but he doesn't want his number in the dude's phone either!

Managed to get my steps in, some work done, some necessary tasks completed, and now I'm catching YOU up. In a bit, we'll be watching some Jessica Jones and other tv. Tomorrow, Rock Band 4!