Clever Naming Devices are not exclusive to the Bros.!

While I was a tour guide at Warner Bros., I always loved to get my guests thinking about how shows are named.

"In Three Words, what is the show '2 Broke Girls' about?" "In as few words as possible, what was the show 'Full House' about?" "Did you know that 'Full House' has a sequel, about DJ Tanner, all grown up and married to (now widowed by) a man with the last name of Fuller?"

Once my guests figured out my game, they totally played along with me for the full two hours. But I've always been a "Clever Namerer".

My first cat's name was Kitty. My current furbabies are named Cocoa and Smokey. 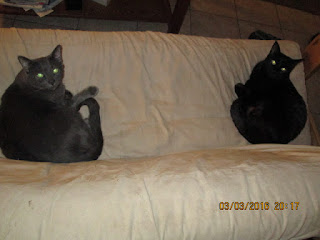 Smokey, you've probably guessed, is the grey one. Cocoa looks like a black cat, but in sunlight, you can see that she's actually a luscious, deep, dark brown, like cocoa. I've talked about them both extensively here (in my blog).

So back in the day, when I was getting my SAG card, I had to decide whether to use my legal name or a stage name as my screen name. Back in the day, Grandma was still alive, and to expose our family secrets by way of making our name famous would have been an unkind thing to do. Also, there's a whole issue of stalkers or whatnot. If Jim Carrey needs to have constant (or at least daily) contact with his beefed-out-Kevin-James-of-a-bodyguard, then do I really want the world in this industry to know me by my legal name? Then there's the fact that I have an ex-husband whose last name I never unloaded because it was such a pain in the ass to change it the first time and why should I go through all that again but why should he get any credit for my acting (or other entertainment) career? I asked the folks at SAG if I had to have a last name. They said "nope". I said I wanted my screen name to be "emelle" (as it had been my stage name in high school and college anyway). They said "okey dokey". I asked if I could keep my name all lowercase (for shits and giggles). They were like, "suuuuure". So it's only recently been first-letter capitalized by the ID department at SAG-AFTRA, and probably, I'll go over there someday to see if I can't get it back to all lowercase (because it has become the name I associate with my professional life).

But I have no last name, professionally, so yeah, Lee. I'm like Cher, or Madonna, except that they were both one-name singers before they were ever one-name actors. And even though I am a singer (and have been longer than I've been an actor), it is not a career I've ever gone for. And now you know.

I have no Three Good Things today. I have plenty of Okay things, but whatevs. I don't have to live up to your expectations. This is MY blog! Hopefully, I'll get to work on set tomorrow. Fingers crossed!
Posted by emelle at 8:17:00 PM