I got to "work" today. It was for a 1960's television show, so of course, the women were instructed to arrive in curlers. I had to be on set seriously frickin' early (well, 7 a.m., which meant giving myself an hour to get there), so I bathed last night to allow myself some "sleep in" time. Packed the "potential wardrobe" last night and rolled the hair this morning.

Got to set in plenty of time, checked in with the PA and then stepped over to the wardrobe trailer to see if they'd like any of my "potential"s. When the ladies popped their heads out and saw only two of the women with hair in rollers (WTF? Only two of us followed the instructions?), they immediately squealed that they hoped that the hair ladies would leave us alone! Once they checked us in with the hair folks and got approval, they put the two of us in housedresses. 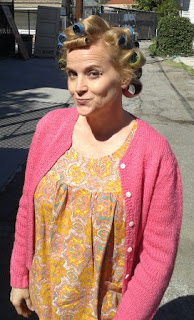 In other news, the new houseguest has arrived, and he's awesome, so far. After hearing my cough, he's forced us both to consume a ginger / apple cider vinegar / honey / lemon / hot water "tea". I am physically unable to chew up the fresh ginger, but I did drink the tea, and while I was drinking it, my cough abated. It's back, but according to the pharmacist I spoke with today, any of my treatments need to be done consistently, so I'll likely be adding this tea to my repertoire. Yum (eh, not really, but not yuck). Maybe I'll reach a point where I am able to chew the ginger.

Email ThisBlogThis!Share to TwitterShare to FacebookShare to Pinterest
Labels: #100happydays, allergies, film, it's a puzzle, LA