When we traveled across the country LAST TIME, I spent some time "leash-training" or "travel-training" the cats, because we'd be in the car with them for a week, and wanted to give them some potty freedom outside of the car on our rest stops (and also be able to get them back into the car from hotel rooms in the mornings).  So I went to Petco and bought a kitty harness and leash, and tried it on Cocoa first.  There was something about it that she really hated so I took her IN to Petco to find one she'd tolerate.  Smokey acquired the first one at that point, because, even though he's much more of a "fraidy cat" when it comes to strange people in his environment, he's pretty much a laid-back cool cat about everything else. 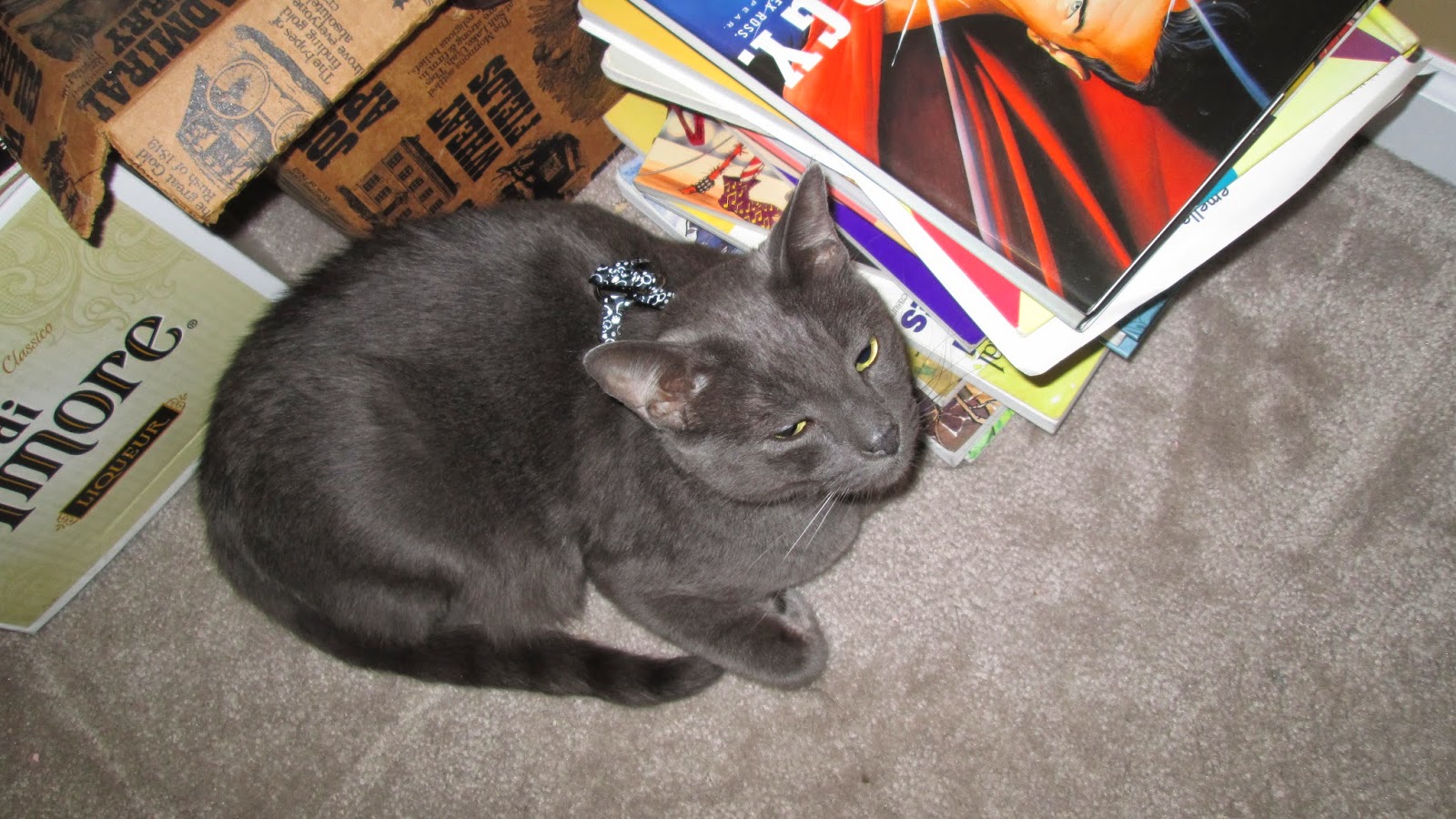 After the first few days of living in the harnesses, both cats chilled out, and the trip was quite excellent.  They were barely on the leashes at all, which were seatbelted in so we, the humans, could exit and re-enter the vehicle without having to track down the felines every time.  They had the "run" of the car, for the most part, but because of the harnesses, there was never a chance of creeping under the driver's feet.  So it was good.

Fast-forward to our upcoming trip.  We've been selling small stuff like crazy, and this weekend, we're hauling big stuff to the local flea market, and we've had occasional "strangers" at the door to take a peek at some of the stuff to buy pre-flea market.  All of this hubbub has made both cats a little anxious - they know that something's afoot.  So tonight, we brought the harnesses back out.

Smokey came up to relax between us on the couch, like normal, while we were watching a movie.  Stephen casually handed me the harness I asked for (which was the wrong one), and I put it on him.  I had to enlarge it a bit to get around his belly, and Stephen realized that it was the wrong one.  So Smokey let me remove it and put the other one on him, as long as he got a treat for his treatment.  No big deal, altho he did decide to slink away afterwards.  Cocoa heard the treat bag, but when she saw the state her bro was in, she ran off... until she just had to have that treat.

She came up to the couch.  Stephen put her harness on her; she fussed at him, vocally, but she stayed put.  He gave her the treat, and she still stayed put, but she stared both of us down for at least ten minutes, and twitched her tail the entire time.  When she finally decided she'd had enough, she SKULKED off to another room.  She doesn't SLINK.  She SKULKS.  There is NO air between her body and the floor, and she often travels in a sort of "rolling" fashion.  Where she knows we'll watch her, to see how unhappy she is. 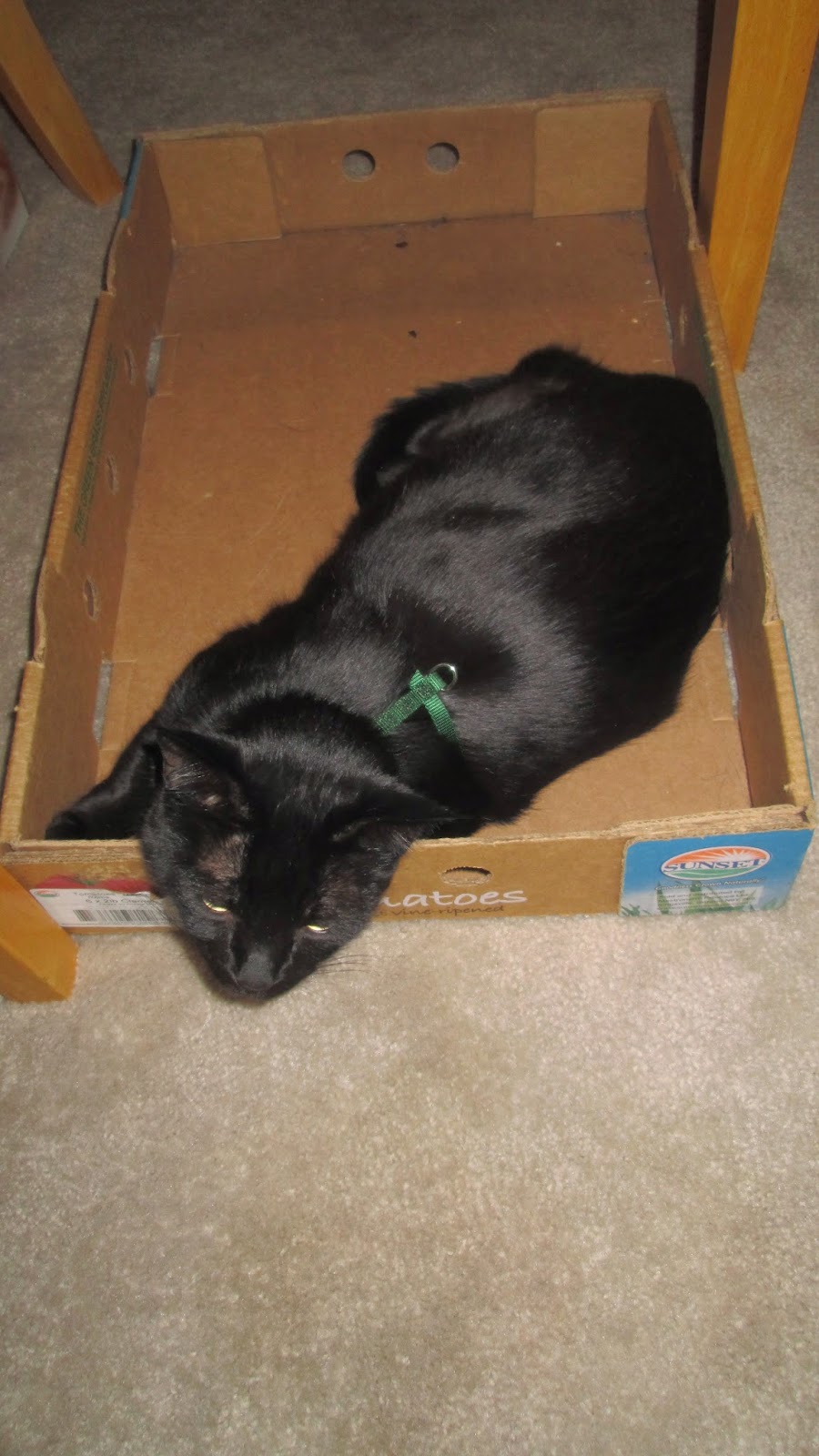 When I fed them, I checked both harnesses - they both FIT properly.  She'll end up skulking for about three days, and then she'll be like, "what?" if we happen to notice that she's walking normally again.  It remains to be seen how soon she'll return to our bed for her nightly belly rubs. ;)
Posted by emelle at 8:42:00 PM